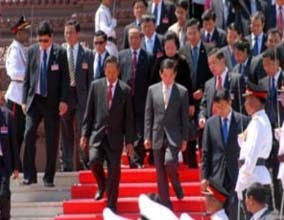 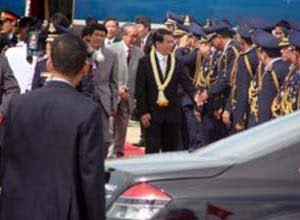 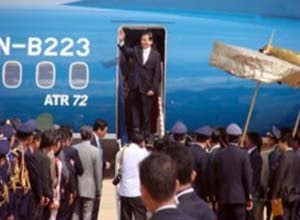 H.E. Mr. Nguyen Minh Triet and his entourages were warmly greeted on their arrival at the airport by Deputy Prime Minister H.E. Kong Sam Ol, Minister of the RoyalPalace and other Cambodian high-ranking officials.

H.E. Mr. Nguyen Minh Triet President of the Socialist Republic of Vietnam and his entourages accompanied by Cambodian Deputy Prime Minister H.E. Tea Banh, National Defense Minister leaved the Independent Monument in Phnom Penh today after lays wreaths and pays respects in memory of those, who sacrificed their blood and flesh in cause national Independent.

During his stay in Cambodia, the Vietnamese president will be received in royal audience by His Majesty the King at the Royal Palace, said a press release of the Cambodian Ministry of Foreign Affairs and International Cooperation.

He will also attend the opening ceremony of representative office of the Voice of Vietnam based in Phnom Penh and visit the Cambodian-Vietnamese Friendship School.

Born in 1942, Mr. Nguyen Minh Triet was elected by the Vietnamese Assembly to the post of President in June 2006.