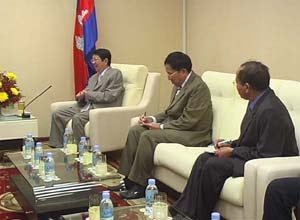 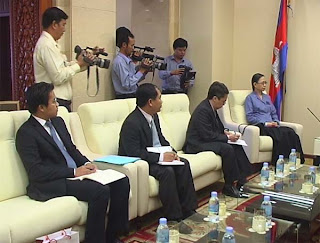 Out-going Singaporean Ambassador to Cambodia, Ms. Tan Yee Woan has congratulated on the restoration of the Cambodian-Thai full diplomatic relations.

It is a good sign that both countries have resent their ambassadors to recommence their duties, said the out-going Singaporean diplomat in a farewell meeting here on Aug. 25 with Cambodian Deputy Prime Minister H.E. Sok An, minister in charge of the Office of the Council of Ministers.

She further hoped that the two neighboring countries will settle their border conflict by peaceful and lawful means, H.E. Phay Siphan, secretary of state for the Office of the Council of Ministers told reporters after the meeting.

For his part, Cambodian Deputy Prime Minister H.E. Sok An explained to the Singaporean ambassador about the origin of the border dispute between Cambodia and Thailand, and briefed her on the results of the World Heritage Committee’s meeting in Brazil over Preah Vihear Temple.

He also welcomed Singapore for having sought the inscription of a national park and an ancient building on the World Heritage List.

He highly evaluated Ms. Tan Yee Woan’s diplomatic mission in Cambodia, through which he said the cooperation between the two countries, particularly the trade cooperation, has been further boosted.

On the occasion, the out-going Singaporean ambassador affirmed Singapore’s assistance to the National Council for Vocational Training whose duties are to give advice to the government in vocational training and labour force use, and to ensure the balance between trained resource and labour market.