Cambodian-Thai Leaders’ Talk Is a Success 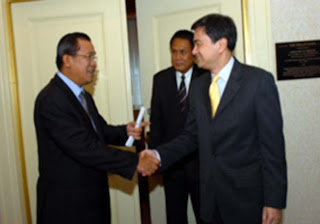 Delegate Minister attached to the Prime Minister and Secretary of State for the Council of Ministers of Cambodia H.E. Prak Sokhon told reporters at a press conference at Phnom Penh International Airport on Sept. 26 upon the return of the Cambodian delegation led by Samdech Techo Hun Senfrom attending the 2nd ASEAN-U.S. Leaders’ Meeting held on Sept. 24 in New York.

The 40-minute talk is aimed at increasing the mutual understanding and at discussing joint measures to further promote the bilateral cooperation between the two neighboring countries, Cambodia and Thailand, said H.E. Prak Sokhon.

On the initiative of Samdech Techo Hun Sen, both leaders agreed on four key points – avoid armed confrontation on the border, promote the cooperation on exchange of arts and sports, examine the possibility to open Stung Bot border checkpoint for trade exchange promotion, and jointly monitor on press reports to prevent misinterpretation, he added.

During his stay in New York, the Cambodian premier has also met with Cambodian people living in the U.S. and Canada. On the occasion, Samdech Techo Hun Sen welcomed and appreciated their support and active contribution, both financial and spiritual, to the reconstruction of Cambodia.
Posted by Cambodian People's Party at 10:58 PM