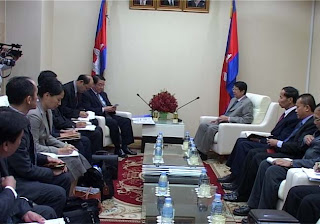 The remarks were made known during a meeting here last Friday between Cambodian Deputy Prime Minister and Minister in charge of the Office of the Council of Ministers H.E. Sok Anand visiting State Secretary for Foreign Affairs of Japan H.E. Osamu Fujimura.

has been working hard to preserve the country’s increased dolphins to around 160 as these mammals have been playing a key role in attracting both national and international tourists. Human resource for the preservation of these dolphins remains insufficient.

Regarding the Khmer Rouge Tribunal, which is undergoing financial lacking, is a key donor for the trial – having funded 45 percent of the total funding for its operation so far. More funding and time are further needed in order to ensure a proper completion of the historic trial process.

In terms of the investment to , has remained the biggest donor for, but its investment is still limited if compared to other countries.

The Japanese side represented by H.E. Osamu Fujimura promised to forward the proposed assistance for his government’s consideration.