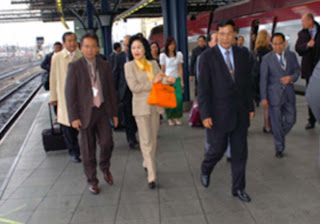 As scheduled, Samdech Techo Hun Sen, also coordinator for the ASEAN group of the ASEM, will deliver keynote addresses related to “Quality of Life” and “Sustainable Development”. He will also give a speech at the press conference of the ASEM 8 Summit.

Five main topics – Global economic and financial management to prevent future crisis; sustainable development; world’s challenges including terrorism, natural disasters, proliferation of nuclear weapons, etc.; regional issues such as the election in Myanmar in November, the Korean Peninsula issue, and the nuclear weapons issue in Iran; and relations between peoples – will be discussed during the summit.

Delegate Minister attached to the Prime Minister H.E. Sry Thamrong told reporters on Oct. 1 at Phnom Penh International Airport before the departure of the Cambodian delegation, led by Samdech Techo Hun Sen, that many forums including the business forum will be also held on the occasion.

Currently, ASEM has 48 partner countries. This year, Australia, New Zealand and Russia will join for the first time the summit and become ASEM’s new members.